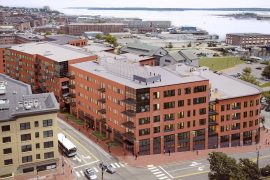 With its recent ranking by U.S.News & World Report as one of the ten best places to live in the U.S., the secret of the sweet life to be lived in Portland Maine isn’t a secret anymore. One of the hottest addresses for that lifelong journey is Hobson’s Landing, the visionary project that’s transformed Commercial Street’s west end with a master plan that includes a new hotel and courtyards that complement a suite of the city’s most distinctive condominiums.

With Phase One of Hobson’s Landing sold out, the sales for Phase Two are exceeding projections, with 40% of the 64 units sold as this project is just breaking ground.

Hobson’s amenities are undoubtedly part of the draw for its new residents. Each one of Phase Two’s one-to-three bedroom condos and penthouses is handsomely appointed with stone or quartz kitchen countertops, finely crafted cabinetry finishes, engineered hardwood flooring, professional-grade appliances, and more. All allow Hobson residents to take to the city streets in clean, green style with their free car-share use of a Tesla.

As Reger Dasco principal Joe Dasco notes in the Portland Press Herald, Hobson’s Landing is another step in answering “some serious need for housing on the (Portland) peninsula.” And it honors the character of the surrounding community in answering that demand. The development carries on Portland’s tradition of orchestrating the pace of modern life with the rhythms of a historic working waterfront. Hobson’s residents, nearby businesses, and the general public who visit the new hotel, shops, and public spaces surrounding Hobson’s Landing will all find Portland’s newest urban neighborhood both a familiar extension of the Old Port’s charms as well as an exciting addition to the town they love.

Contact us today to learn how you can become part of Portland’s next regional renaissance.